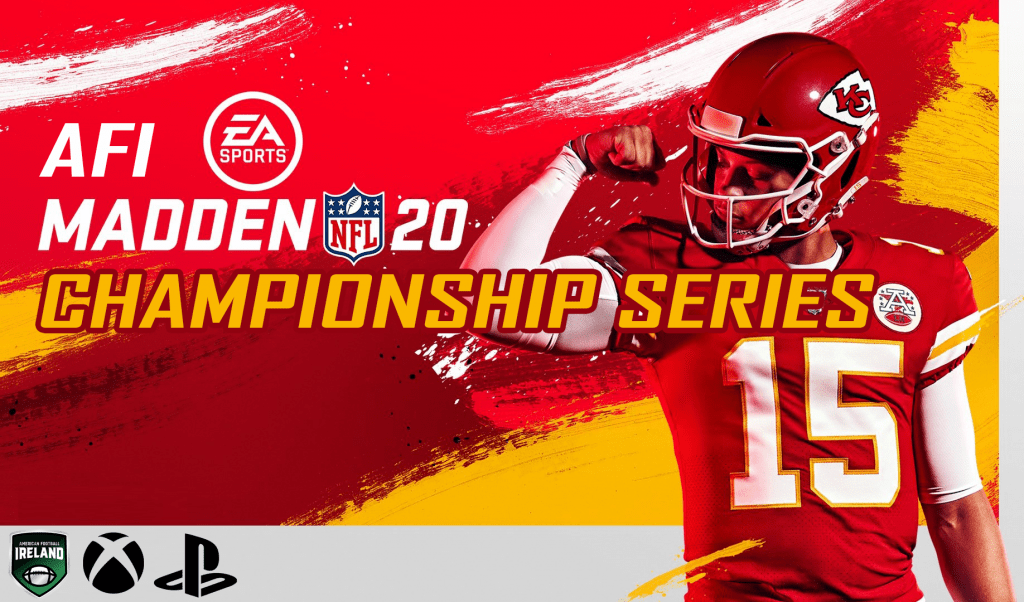 American Football Ireland is delighted to announce the first AFI Madden Championship Series! There will be two championships in this series – one for PlayStation 4 players and one for Xbox One players, with Madden 20 as the chosen version of the game on both platforms. The winner of each championship will receive a €50 voucher!

Please note: this is open to AFI members only, not the general public.

How will it work?

AFI member clubs will hold their own internal club tournaments to decide a club champion for each platform (i.e. PlayStation and Xbox). The club champions will move on to the AFI Madden Championship Series, where they will face champions from other clubs in a knockout format.

We also ask for a runner up to be provided for each platform from each club, who may also make it to the AFI Madden Championship Series, depending on the number of club champions we receive. Should runners up be required, they will be selected by random draw.

The AFI Madden Championship Series will be managed by AFI and a live draw for each round will take place on Facebook. Players will then have 3 days to arrange a day and time to play and also to play the game. For example, if the draw takes place at 8pm on a Wednesday, the players will then have until 9pm Saturday of the same week to play the game – it is up to the players to arrange the game between themselves. The final will be a day and time agreed by AFI and both players.

What do we do next?

Every club administrator has been contacted by email with further information – please check your junk/spam folder if it does not appear in your inbox. Clubs will each devise their own way of determining a club champion and runner up – details of club champions and runners up must be sent to AFI no later than 6pm on Wednesday 20th May 2020. Failure to return the form by then will result in your club not participating in the championship series – late returns will also not be accepted. The live draw for the first round will take place at 9pm on Wednesday 20th May 2020.

The below is an initial list of championship series rules to help you complete your internal club competitions. AFI reserves to right the amend/remove/add to these rules.

We will be using the following rules when the championship series begins, so we recommend that you also use the same:

Players can pick any of the 32 NFL standard teams – Pro Bowl/Ultimate Team/Any Other cannot be used. If players are using the same team, please ensure that the uniforms are different – at a very minimum, using a different jersey colour. Players are permitted to change teams for each round of the championship series.

AFI will look to have streaming capabilities in place by 20th May. Further communication on this will follow.

Players are expected to show good conduct at all times. Any threatening behaviour, foul language, or any unsportsmanlike conduct may result in disqualification from the championship series.

Any disputes will be determined by the AFI Board and the decision will be final.