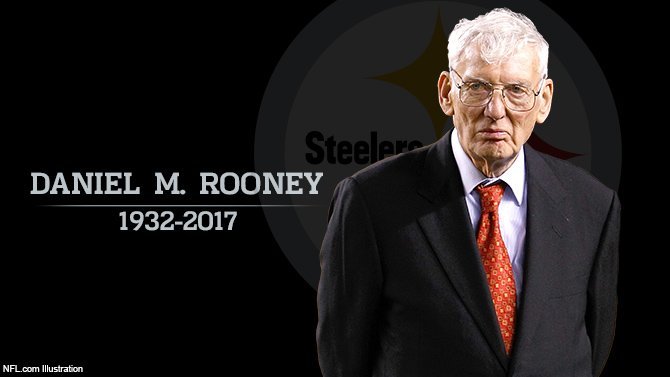 The Irish American Football Association would like to express its condolences to the family and friends of Pittsburgh Steelers President, Dan Rooney, who passed away on Thursday.

As well as being one of the most influential figures in NFL history, Mr. Rooney was a great friend to Ireland, serving as Ambassador and supporting many initiatives such as the Ireland Funds. During his time as Ambassador, many in the IAFA will fondly remember the flag football games played on the Ambassadors Residence lawns on 4th July. His affinity to Ireland is due to his families strong Irish heritage – having emigrated to the United States from the Newry.

He was proactive supporter of bringing major games to Ireland – starting with the Emerald Isle Classic series in 1988 and 1989. This support extended to some of the more recent College Football games such as the 2014 Croke Park Classic. Mr. Rooney also brought NFL football to Ireland when his Pittsburgh Steelers played a preseason game against Chicago Bears – after which Mr. Rooney very kindly donated 80 sets of football equipment to local clubs in Ireland.

While we are all saddened by his passing, his life is to be celebrated as someone who made a big difference.