The Dublin Rebels will play Bucharest Rebels in the final of the Atlantic Cup, in ALSAA, Dublin on Saturday 25th November, kick-off 1pm.

The Atlantic Cup is a competition where the Irish National Champions are invited to compete against the winners of other European amateur leagues in a mini-tournament format to crown the Champions. This years competition sees some change to the usual county line-up with France and Romania replacing the traditional Belgian and Netherlands opposition, who have opted to step up to EFL level. Unfortunately due to flight issues – Ryanair flight cancellations – the French entrant Les Diables Rouges, have had to pull out of the tournament at short notice. This means that this years Atlantic Cup will be a single game final between Dublin Rebels, and 2016 Romanian Champions the Bucharest Rebels (pictured in orange jerseys below).

As winners of the Shamrock Bowl in 2016, the Dublin Rebels return to the competition, having been Irelands inaugural representatives in the competition, and having competed previously in Belgium twice, and the Netherlands. They will be fielding a strong lineup on Saturday as they seek to win their first Atlantic Cup title. The Romanians are coming off a strong domestic season. Their key players are wider receiver Radu Ene (#85) and linebacker Cosmin Zamfir (#50).

GFL International and IFAF Europe have announced that the Atlantic Cup format will be reviewed for 2018 with a view to expanding the tournament to more European countries and adding additional entrants beyond the normal three of four. 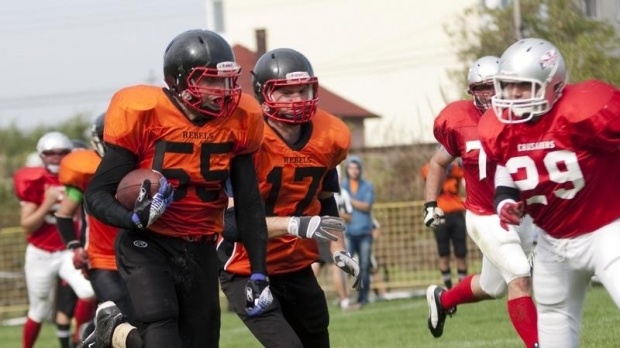