On Saturday 8th of May, Mr. Brian Cleary fulfilled his term as Commissioner with American Football Ireland, marking the end of a 5+ year run of involvement within the sports’ management team. His positive impact has certainly been felt in all levels of AFI, and he will be missed going forward. In a recent correspondence with AFI members, Brian wrote,

“I would like to take this opportunity to thank you all for your support over the last five years. It’s amazing looking back to see how far we have come in such a short space of time and it wouldn’t have been possible to make the changes we did without your support. I won’t mention any names, I think I’ve already mentioned them at the AGM, but I would like to thank the board members and directors past and present who fought the good fight, worked hard and continue to work tirelessly to improve our association and its reputation. I have no doubt that the current management will continue to develop and grow our association, there is some exciting times ahead and I wish them and you every success.”

On this, AFI President Aidan Maguire issued the following statement,

“Brian has been a part of AFI management since 2015 and throughout his time he has shown a commitment and an unyielding dedication to promoting American Football in Ireland. At all times he has acted in good faith with the best interests of all AFI members at heart. His commitment and love for the AFI and its members has been second to none.

The last number of years has brought about some significant changes within AFI. As a board member and as Commissioner, Brian can hold his head up high known that the endless hours of hard work he has put into our sport, as a volunteer, has played a huge part in AFI’s growth and development. As Interim Commissioner and Commissioner of AFI, Brian has brought a strong sense of impartially across the board when dealing with teams or gameday issues/queries.

Going forward, I am confident that the systems which Brian will leave behind as Commissioner will pave the way for his successor in a way that will ensure a smooth transition of power. On behalf of the American Football Ireland, I would like to thank Brian for all his hard work over the last number of years.”

From all in AFI; thank you Brian, for your years of dedication and hard work given to the development of AFI, without which we wouldn’t be as far along as we are today.

We wish you every success for your future endeavours! 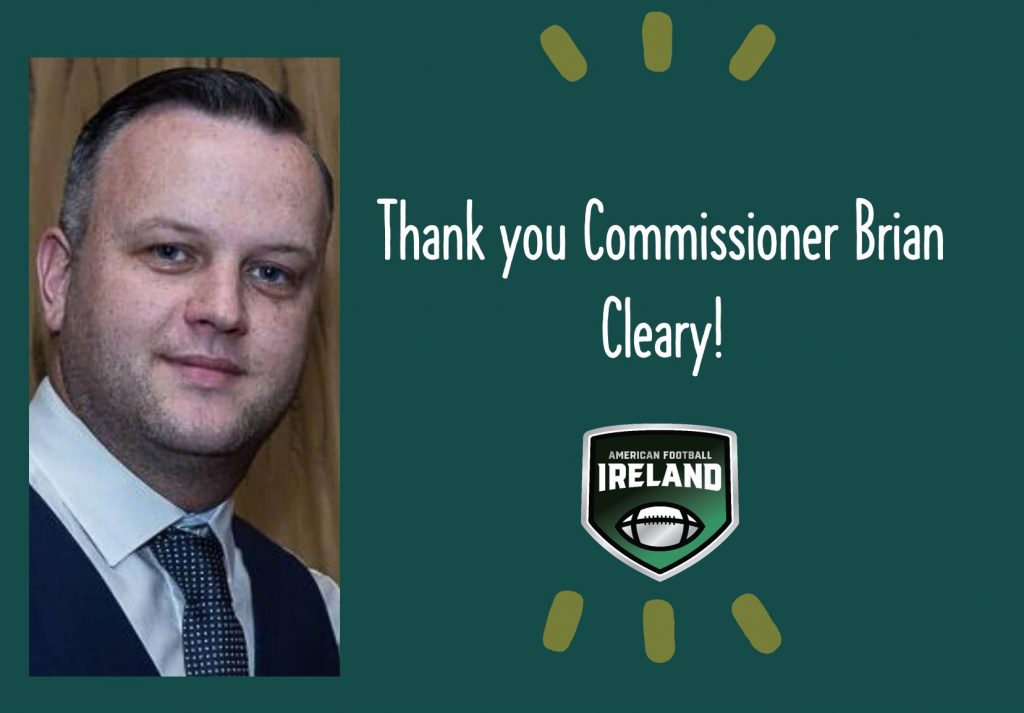