Concussion can occur in any physical sport, and American Football Ireland is committed to ensuring that, should our players receive concussion, it is managed effectively to reduce the risk of potential serious and long-term injuries and to help the player return to play in the safest way possible. Here, we’ll detail what concussion is, how suspected concussion will be managed and how the process in which players return to play works.

Concussion is a traumatic brain injury that effects how the brain functions when it impacts with the inside of the head. Concussion can be caused by a direct blow to the head or body and from whiplash type movements of the head and neck that can occur when a player is tackled or collides with another player or the ground. Immediately following a suspected concussion, the brain is susceptible to further significant damage in the event of another impact. Should a player have suspected concussion, they must follow the Graduated Return to Play (GRTP) protocol before engaging in any American Football activity.

Players, coaches, officials and medical personnel should be aware of the following signs of suspected concussion:

Should a player display any one of these signs, they must be removed from any activity immediately and may not return until then have completed the GRTP protocol.

Signs and symptoms of concussion

The signs and symptoms of concussion usually start at the time of the injury but the onset of these may be delayed for up to 24–48 hours. Parents/guardians, family members and friends should be aware of the signs and symptoms of a concussed player. Again, should a player have any one of these symptoms, they must be removed from any activity immediately and may not return until then have completed the GRTP protocol. The GRTP protocol must be completed by any and all individuals who enter in to the concussion protocol regardless of subsequent medical assessment.

What happens if player has suspected concussion:

Coaches and officials will be on the look out for signs of concussion, but we would ask anyone present at a game or training to advise the coaches or officials present should they suspect that a player is exhibiting signs of a possible concussion. If a concussion is suspected during a game, the player should be referred to the medical crew. Players must comply with the directions of their coaches and the game officials in this regard. A suspected concussion will be considered a concussion. Should a player be suspected of having concussion, whether in a game or training, the player must immediately be removed from all activities and follow the GRTP protocol below. Coaches and players are obliged to report all concussion incidents via email to the American Football Ireland commissioner using concussion@americanfootball.ie.

It is our players’ responsibility to report whether they received concussion during any activity outside of American football. 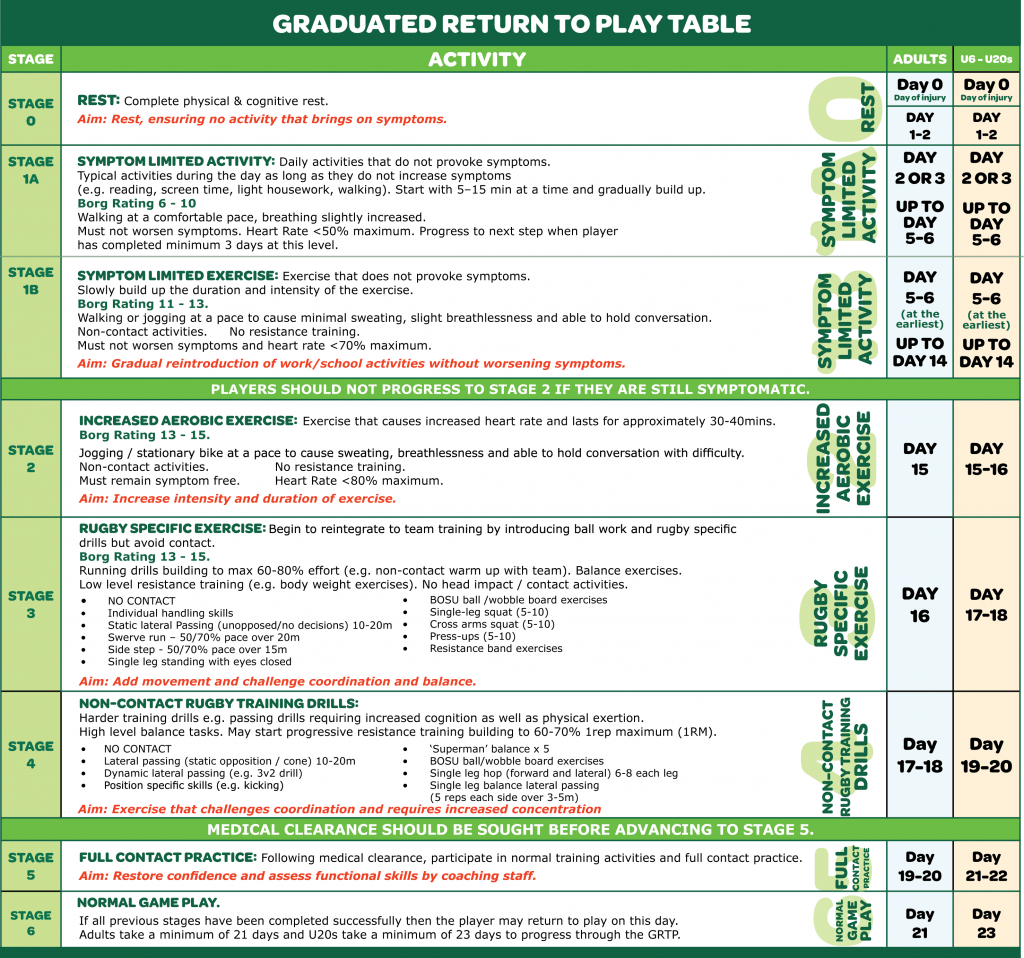