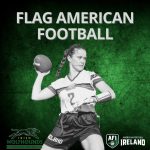 When asked about the Women’s national team program, Coach Dan Shaw had this to say:
Female Participation in flag football is something I have always been passionate about both at club and national level. This will be a fantastic opportunity for top tier athletes from within our own league bit also across other sports to pull on a green jersey and represent this island next summer. I am very excite to see what caliber of female squad we can put on the field for next year.

Interested athletes can submit their sporting CV to flag_hc@irishwolfhounds.ie. The opportunity to represent Ireland in a rapidly developing sport has presented itself — find out if you have what it takes to be a Wolfhound!