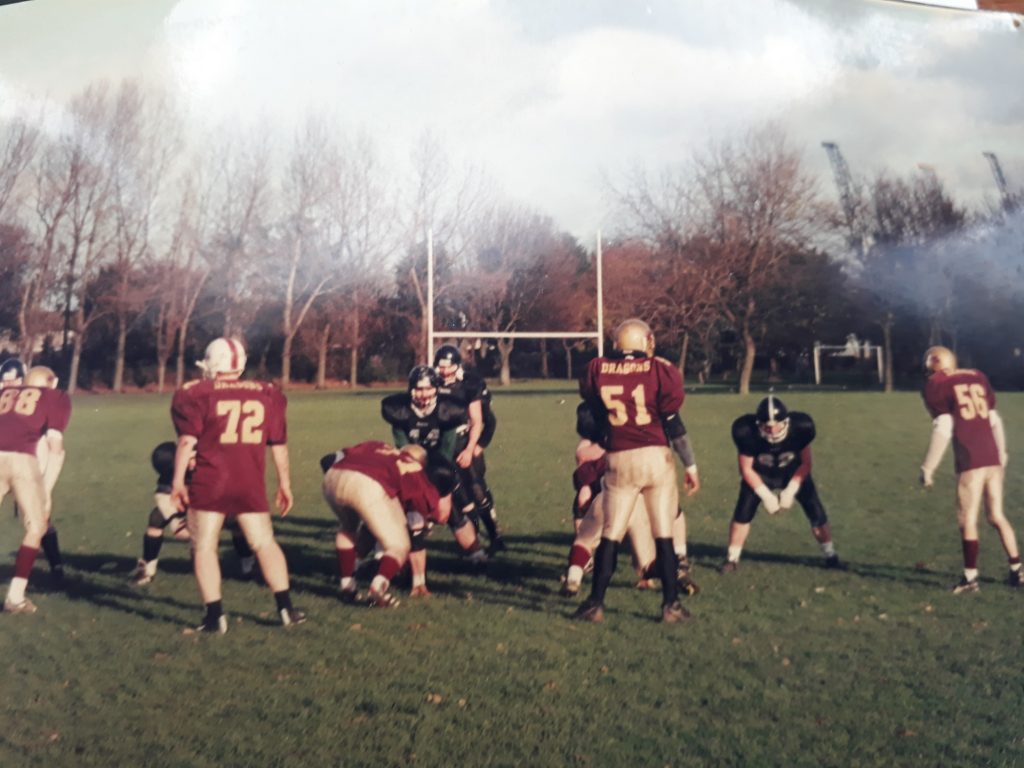 Here’s some nostalgia – if you’re one of our alumni; or history if you’re currently playing. We’ve looked through some of the picture archives at some snaps from yester year. From the pioneering era of Irish football, when you had to be a real trailblazer to play the sport. Not all the uniforms match – this was before internet shopping and the advent of equipment stores in Europe. The fields may not have been as good many today. But, in spite of appearances, some great football was played by some very committed players. Apologies for the quality of some of the pictures – these were all taken on real cameras with film in them. No auto focus or touching up. Enjoy! Above is the oldest picture in this batch. Dublin Celts (green) versus Craigavon Cowboys (black) in 1991. Two of the original teams who started playing competitive football in Ireland in the 1980s. Both played in Europe during this era. Greg Loughran, the current Cowboys coach was probably on the field in this game. This is from the first ever American football game played on the historic campus of Trinity College Dublin. The game was part of the festivities for the colleges 400 year anniversary celebrations in 1992.Dublin Tornadoes (white) defeated Antrim Bulldogs (purple/yellow) with a field goal as time expired. The game was organised by our current Commissioner Cillian Smith during his college days. Interesting piece of trivia – this game took place before the first ever GAA game was played on campus later the same year. In this picture, we see a familiar face to todays IAFA members. Kevin Sharkey – currently on the Wexford coaching squad and formerly of North Kildare – is player number 67 playing for the Dublin Celts against Dublin Tornadoes in 1993. The Dublin Tornadoes 1993 Shamrock Bowl winning team. This is the Tornadoes first of 3 consecutive Shamrock Bowls. They were coached by the late Dave Curran (centre wearing blue/white shirt), who previously led the Dublin Celts to Shamrock Bowl success. Picture of the Dublin Lightning huddle in 1997, when the team was defending its Shamrock Bowl title in the last full season of football before the start of the big shut down in the late 1990s. The opponents were Dublin Bulls – seen in the background – the only company team ever to play in Ireland. They were owned by the Gateway Computing who used to have a large plant in Dublin. The mid to late 1990s saw flag football come to prominence with the very competitive Irish Flag Football League being played in various parks around Dublin. The league, which had 11 teams playing a 10 game regular season at its peak, played a 7-a-side version of semi-contact flag football. Pictured above is the Northside Devastators team, who won the title in the late 1990s. A rare photo from the year that competitive football returned to Ireland in 2001. Dublin Rebels (black) play Dublin Dragons (burgundy) in Ringsend Park in Dublin. Another rare snap from 2001 featuring the other two teams who made up the four who restarted in 2001. This is Carrickfergus knights at UL Vikings – believed to be the Vikings first ever home game. Note the blue scrimmage vests with painted numbers – the Vikings first uniforms did not arrive until later in the season. And finally, from August 2002, Carrickfergus Knights (yellow) versus Team Canada. The Knights, as Irish Champions, represented the league against the touring visitors in a challenge game, which was played at St. Vincents GAA in Dublin.