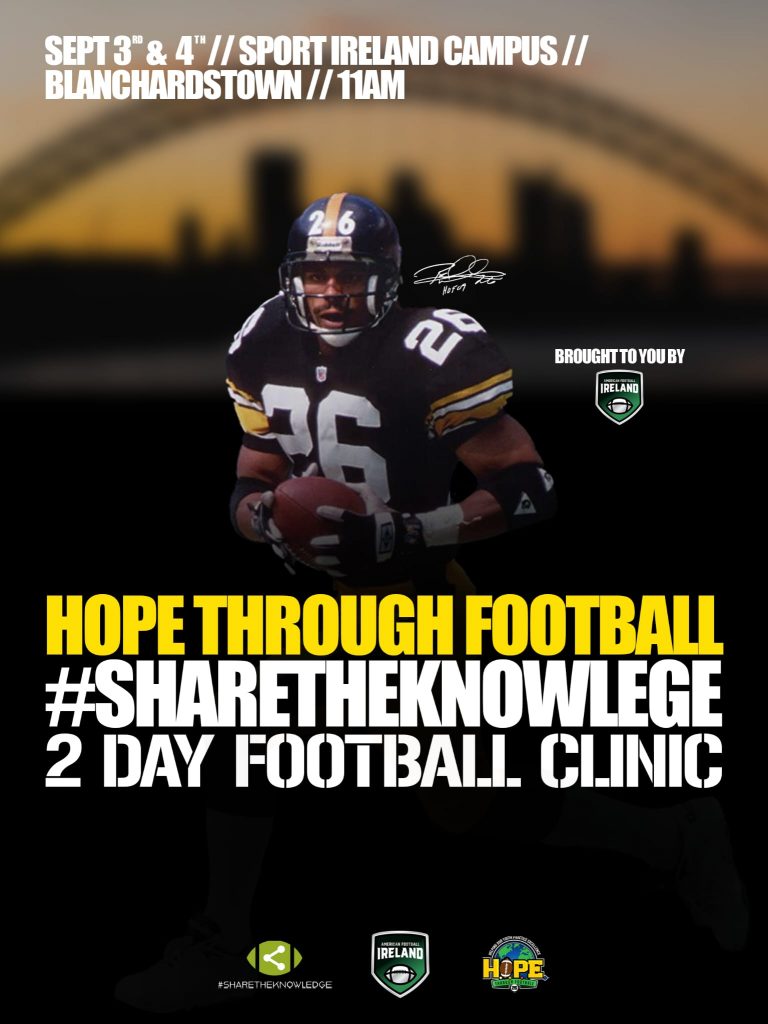 AFI are delighted to announce that Pro Football Hall of Famer and current XFL Head Coach Rod Woodson will deliver a 2-day football clinic at the National Sports Campus, Blanchardstown on Sept 3rd-4th. The clinic will be hosted in conjunction with HOPE Through Football and #ShareTheKnowledgeUK. Coach Rod has both coached and played in the NFL, having been a part of the Raiders and Pittsburgh Steelers coaching staffs at different stints between 2011-2017, and a renowned cornerback — most famously for the Pittsburgh Steelers. Woodson achieved many records during his time on the field — many of which stand to this day — including most fumble recoveries and most interceptions returned for a touchdown. Woodson became a first-ballot Pro Football Hall of Famer in 2009, and in 2016 was also inducted into the College Football Hall of Fame.

AFI President Aidan Maguire had this to say on the historic September event:

“It is with great excitement that AFI can announce that NFL Hall of Famer, Super Bowl Winner and Footballing Legend, Rod Woodson will be bringing his Hope Through Football Clinic to Ireland this September. In conjunction with our AFI partners at #ShareTheKnowledge, Hope Through Football will hold a two day football clinic at the Sport Ireland Campus, Blanchardstown on September 3rd & 4th.

The growth and development of our coaches and players alike have been, and will continue to be, a key goal for American Football Ireland. In January 2021, AFI joined forces with Coach Woodson, Hope Through Football and #ShareTheKnowledge with the sole aim to improve and develop football here in Ireland. Since then, the calibre of coaching & mentorship provided by AFI coaches is constantly improving, which is encouraging all our athletes to improve their skillsets and more importantly helping them feel more empowered to develop into strong individuals in life. This is surreal for me and AFI. To attract Coach Woodson and this quality of football clinic to Ireland is a milestone event in AFIs history. I personally cannot wait and I am confident that this will be the first of many. Stay tuned to our social media platforms and website as there are more exciting announcements ahead relating to this clinic.”

More details on the weekend, including registration, scheduling and sponsors, will be released in the coming weeks.