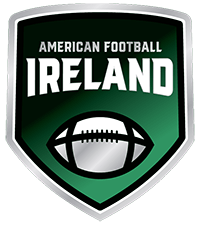 Chief Finance Officer Conor Gibney and Finance Officer Michal Kazio have stepped down from their positions after over two years of volunteer service. Conor and Michal played critical roles in producing the first set of fully audited accounts – a requirement set by Sport Ireland due to an increase of funding. Furthermore, they developed a payment policy and introduced online banking which removed the need for cheques, streamlining our financial processes and improving transparency.

Commissioner Brian Cleary “It was a pleasure to work with both Conor and Michal over the last two years. Their hard work was invaluable to improving our financial governance which resulted in significant increases in our funding. They have been a true asset to the AFI and I would like to wish them the best of luck in their future endeavours.”

Interim President Aidan Maguire “On behalf of American Football Ireland, I want to take this opportunity to offer our thanks and sincerest gratitude to both Conor Gibney and Michal Kazio. During their time within AFI, they played a key role in setting up a reformed finance department, while also putting systems in place to help AFI succeed long into the future. Both Connor and Michal embraced their roles as volunteers and ultimately the sport of American football. We wish them all the best in their future endeavours.”

Following a thorough recruitment process, Alan Browne was appointed as Chief Finance Officer in October 2020 and has since been undergoing a transition period with Conor and Michal.