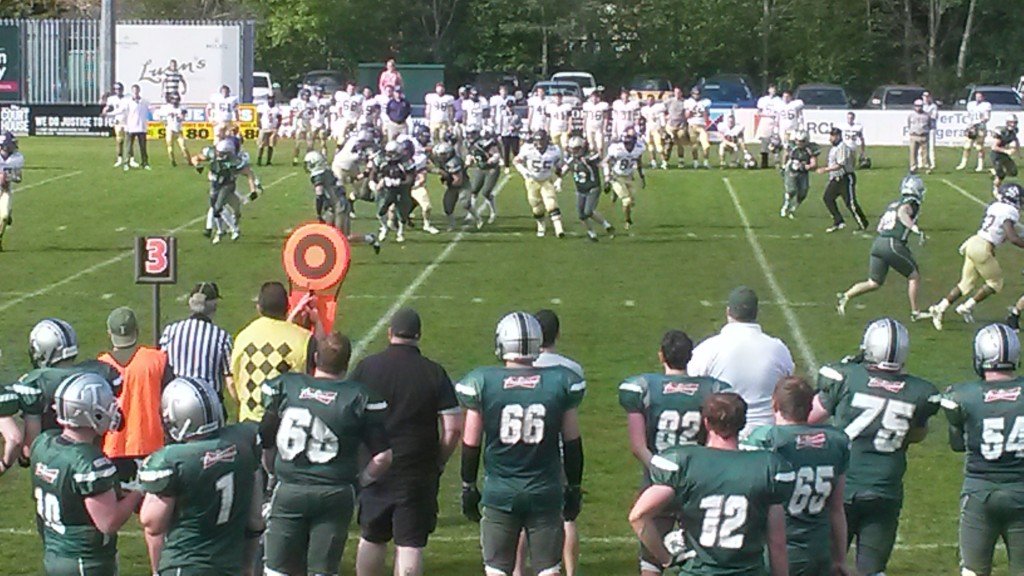 The Belfast Trojans fell to a narrow defeat this past weekend, losing 27-20 to visiting American college team the Sewanee Tigers.

It was a valiant effort from the four-time reigning champions, a performance and scoreline that will go down in the history of the game on these shores. The NCAA Div III Tigers were impressive with both sides of the ball performing at a level rarely seen in this country. Their defence gave the Belfast offence difficulties all day, while their offence was relentless in pounding the ball as well as finding tall receivers on the outside.

It was Sewanee who opened the scoring a superbly thrown deep ball caught by a wide receiver in the corner of the endzone. In the 2nd quarter and it was 14-0 on a similar play, with again their receiver who eclipsed the 6 foot mark going up and snagging the ball despite the blanket coverage by Trojans cornerback James Gallagher. However the Trojans showed they weren’t here to be in awe of the American squad and responded before the break. James McKelvey found rookie Jack Millar in the corner of the endzone and the rookie did the rest to cut the deficit. Into the 2nd half and it was the Tigers who added to the scoreboard first, with a tough run from their running back punching it in from close.

The moment of the game, however, was soon to follow and if you see a better touchdown in any form of football this year you will be doing well. On the ensuing kick off, Matt Armstrong fielded the ball and took a few steps forward. He then hit the brakes and laterally passed the ball to Jona Siri on the other side of the field. Siri then put the foot on the gas and weaved through the Tigers kickoff unit with some fantastic blocking. The home crowd went wild and Siri’s highlight went viral (video from nfl-ireland.com):

David Colvin scored with less than two minutes remaining to make the score 27-20 to Sewanee, a smart grab on a post route with McKelvey putting the ball on a dime.

That was all she wrote, though, as Sewanee ran out the clock, handing the Trojans their first loss of the season, albeit a heroic performance from Belfast against a team with such resources and knowhow. A fantastic day was had by all the visiting Tigers squad, staff and parents and indeed the hundreds of spectators that enjoyed their day out at Deramore Park watching American Football in Ireland.