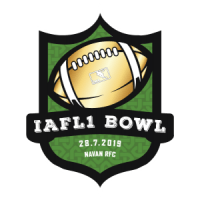 This will be the third IAFL 1 Bowl appearance in three years for the Craigavon Cowboys, who finished top of the league after winning seven games and losing only their season opener. The Cowboys defeated Trinity College Dublin 27-19 in the semi-final to secure their spot at the IAFL 1 Bowl. Their defense finished as second best in the league, having only conceded an average of 7.9 points a game whilst the offense ended third best in the league scoring 238 points in eight games. We chatted with Cowboys president Jo Buchanan about the season so far and Sundays crunch game:

A tricky start to the season saw the Cowboys lose their only game this year to Trinity, before going on to win their next seven games and finishing top of IAFL 1. How much has the team improved from that first game to now?

“There has been a lot of changes throughout the season, particularly with new guys starting and old faces returning, which have been great additions to an already solid squad. We have played well in all three phases of the game and everyone has really come together week in week out to improve as a unit. Great coaches help too, we learned a lot about how we play in that Trinity game which let us make adjustments where needed. The team as a whole has improved massively since then.”

The Cowboys ran out 27-19 winners against Trinity in the semi-final, reaching the Bowl game as well as avenging their early season loss. What did you think of your team’s performance in that match?

“We were in first gear the whole first half. The heat was difficult to adapt to and we just weren’t clicking. We regrouped at half time and really stepped up our performance in the second half, which inevitably became too much for Trinity’s depleted squad. Fair play to them for travelling for such low numbers and putting in the performance they did. We have been working hard to ensure we start the bowl game playing like where we left off with Trinity.”

The Cowboys last played the Westmeath Minotaurs in June where their defense dominated, forcing a shutout against the Minotaurs high scoring offense. What is the game plan going into the Bowl game?

“We treat offense, defense and special teams equally as they are all just as important as each other. We have seen what the Minotaurs have but they were missing some players in the previous game, so we know this will be a completely different game. We will be focusing on us, our discipline and playing smash mouth Cowboys football.”

Finally, what advice would you like to give to your team before the big game on Sunday?

“It is a big occasion so soak it all in. Focus on your job and support your team mates. Finally and most importantly, enjoy it!”