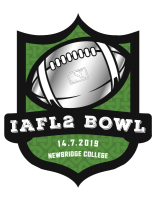 What a game we have in store this Sunday as the CIll Dara Crusaders take on the Meath Bulldogs at Newbridge College Kildare for the IAFL 2 Bowl. These teams have clashed twice already this season, with each side coming out with one win apiece so this doubles up as a series decider!

Home advantage will certainly have a part to play this Sunday, but the Crusaders are under no illusion they will need to be at their best to be able to lift the Bowl. It has been an up and down few years for the Kildare outfit, but this season shows what dedication and perseverance can achieve. Crusaders head coach Ken Farrell has his team ready for their biggest game of the year “This has the potential to be an epic battle or blow out for either team as it will come down to whoever can keep their heads and not let the enormity of the fact that this is all or nothing. Nobody wants to take home silver. The Bulldogs had the upper hand in the last game so we are ready to return that favour. Being an ex-bulldog, I know they are a great bunch of lads that fight to the end and will make this a great game. But the Crusaders are more than a team, we are family and hungry to prove to ourselves that being league champions is hopefully only the first step.”

The last IAFL 2 Bowl champions (2017) return to the main stage in an attempt to reclaim their Bowl. A testing start to the season was quickly put aside as the Bulldogs ran wild, scoring 157 points as well as recording two shut outs in their most recent six wins. Bulldogs head coach Mike Zito has enjoyed an excellent first year at the helm so far, but knows that his side will have to be up to the challenge to cap off the season with the IAFL 2 Bowl “The 2019 Bulldogs season has been quite a ride, we didn’t start the way we wanted to. It took a couple of weeks for the team and myself to get to know each other. With that being said, I couldn’t be prouder of this team and what we have put out on the football field. We got better every week, and the hard work has lead us to a shot at the title. We will be ready to play on the 14th, and the expectation is to leave it all on the pitch and see what happens.”